#MilitantFactionsQuotes 57: One cold night in another century, the longest of the year, I realised I had lost my keys 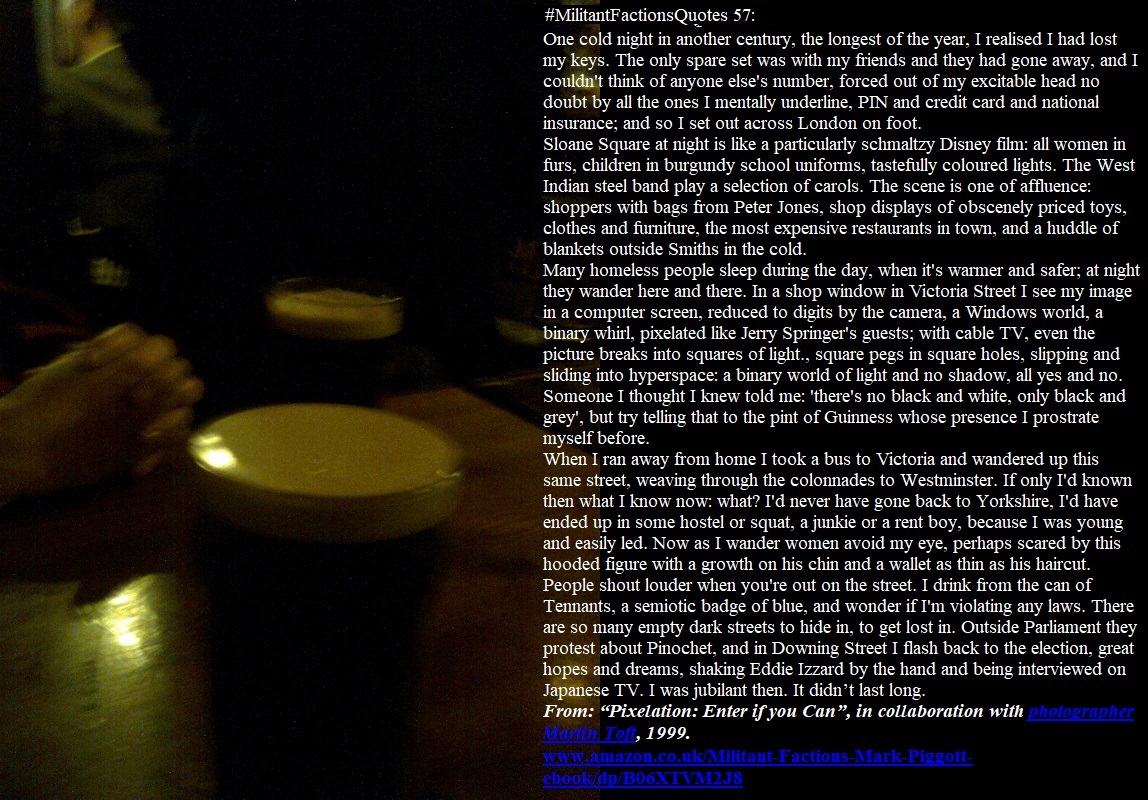 One cold night in another century, the longest of the year, I realised I had lost my keys. The only spare set was with my friends and they had gone away, and I couldn't think of anyone else's number, forced out of my excitable head no doubt by all the ones I mentally underline, PIN and credit card and national insurance; and so I set out across London on foot.

Sloane Square at night is like a particularly schmaltzy Disney film: all women in furs, children in burgundy school uniforms, tastefully coloured lights. The West Indian steel band play a selection of carols. The scene is one of affluence: shoppers with bags from Peter Jones, shop displays of obscenely priced toys, clothes and furniture, the most expensive restaurants in town, and a huddle of blankets outside Smiths in the cold.

Many homeless people sleep during the day, when it's warmer and safer; at night they wander here and there. In a shop window in Victoria Street I see my image in a computer screen, reduced to digits by the camera, a Windows world, a binary whirl, pixelated like Jerry Springer's guests; with cable TV, even the picture breaks into squares of light., square pegs in square holes, slipping and sliding into hyperspace: a binary world of light and no shadow, all yes and no. Someone I thought I knew told me: 'there's no black and white, only black and grey', but try telling that to the pint of Guinness whose presence I prostrate myself before.

When I ran away from home I took a bus to Victoria and wandered up this same street, weaving through the colonnades to Westminster. If only I'd known then what I know now: what? I'd never have gone back to Yorkshire, I'd have ended up in some hostel or squat, a junkie or a rent boy, because I was young and easily led. Now as I wander women avoid my eye, perhaps scared by this hooded figure with a growth on his chin and a wallet as thin as his haircut.

People shout louder when you're out on the street. I drink from the can of Tennants, a semiotic badge of blue, and wonder if I'm violating any laws. There are so many empty dark streets to hide in, to get lost in. Outside Parliament they protest about Pinochet, and in Downing Street I flash back to the election, great hopes and dreams, shaking Eddie Izzard by the hand and being interviewed on Japanese TV. I was jubilant then. It didn’t last long.

-From "Pixelation", a collaboration with photographer and artist Martin Toft. Read the whole text in Mark Piggott's fiction/non-fiction collection "Militant Factions" available in paperback or Kindle from Amazon.